A Puppet Happening in the Garden

A ticket is not required for this performance, but we'd sure like to know if you'll be attending! 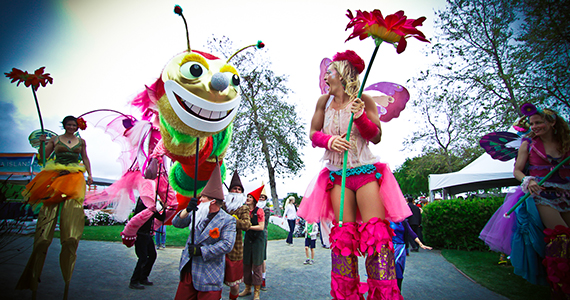 Gnomesense! mashes up the timeless arts of busking, street performance, and giant puppet pageantry, invoking the spirits of non-sense, serious play, and make believe to come out and bask in the sunshine. Imagine your garden come to life in a fantastic and absurd incarnation with stilt walking faeries, giant insect puppets and a garden gnome brass band. In, age-old fairy tale fashion, the show questions what is up, what is down, what is straight, what is round – and ask what is it that you invest in believing in on a day to day basis? This is an audience participatory happening-meta-theatrical impromptu dance party–sing/along led by a group of benevolent, albeit anarchic, mystical garden beings! 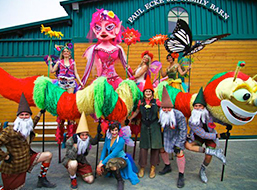 Founders Bridget Rountree and Iain Gunn have been collaborating under the name Animal Cracker Conspiracy since 2006. Their shared interest and investigation of where fine art, puppetry, performance art, physical theater and mixed media intersect is a continued source of inspiration for their work. They have participated in both national and international artist residencies and workshops with Bread and Puppet, North American Creative Laboratories, La Pocha Nostra, RosenClaire, and the Old Trouts Puppet Workshop. They have received support from the Jim Henson Foundation, Puffin Foundation, San Diego Foundation, Sator Arts Foundation, Synergy Arts Foundation, and The Puppet Slam Network.